You are here: Home / Recommendations / WBW 32: Regular vs. Reserve

The theme for this month’s virtual tasting seemed deceptively simple. Find two wines from the same producer, varietal and vintage; one the regular release, the other the “reserve” and compare them. Is the reserve worth the extra money or not? Nice and simple but the only problem is finding synchronized vintages in the stores which I think will be a problem for a lot of participants this time.

In the four stores I visited, I only found a couple of options (ironically in the same store). The first were a couple of Rosemount Chardonnays from 2005; the regular Diamond label, the other their “Show Reserve”. I’ve had the “Show Reserve” Rosemount wines in the past and thought they were generally worth the price difference but trying a $25 Chardonnay against their $8 Chardonnay didn’t seem too interesting to me. And the bottles were standing up on the shelf for who-knows how long. The second choice ended up being my selection here. Two Rancho Zabaco Zinfandel’s from Sonoma’s Dry Creek Valley. Although the regular release was the 2004 vintage, I was able to spot a single bottle of the 2003 in the bottom of the bin to compare with the ’03 “reserve”.

The term “reserve” is used by many wineries but in my experience there are two usage methodologies. The first is just branding to imply higher quality for lower-end wines. You’ll see term this used on Yellowtail, Columbia Crest and other popular brands to separate those from their entry priced wines. Many times the wine in the bottle is not that different from the regular release. The second methodology is used by several established Napa Valley wineries where “Reserve” or “Private Reserve” is used to designate their best wines. At one of the better local stores they stocked nearly a complete 1990’s vertical for Beringer Private Reserve Cabernet Sauvignon, for example, but were selling the 2003 vintage of the regular release (the reserves were also $95 a bottle and up so I probably would not have gone in this direction had they stocked the 1999 Beringer Cab to match with the youngest reserve in stock). The wines I ended up with are probably somewhere in between these two usages of the term so I thought it was a pretty decent choice. I also like Zinfandel quite a bit and haven’t had this brand recently.

Rancho Zabaco is one of the many Gallo sub-brands used for Zinfandel, Pinot Gris, Sauvignon Blanc and Syrah. Their ubiquitous “Dancing Bull” bottling gives the Ravenswood Vintner’s Blend brand a run for the money in the $8 and under range of Zinfandel. But they aspire to higher levels of Zin and each of the wines I selected tonight is from this upper tier. 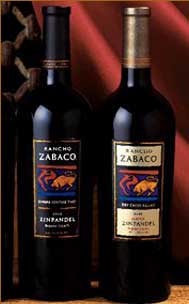 Rancho Zabaco, Zinfandel, “Sonoma Reserve”, Dry Creek Valley 2003* ($22) – Dark purple-black in color with aromas of blackberry, sage and spice. Blackberry, black pepper and spice flavors finishing with medium firm tannins and a bit of heat. More structured than the regular release with nice body but not nearly as jammy in the fruit department. The heat is the main difference here.

So is the “reserve” better than the regular release? Not in this tasting although the wines are very similar. The regular release is a softer wine with less of a tannic backbone but a lot more ripe fruit. The reserve is more of a structured Dry Creek Zin with hard angles but some heat on the finish. Each wine is recommended but the regular “Heritage Vines” release is the best value here as for $22 there are much better Zin’s to be had on the market.

* The first bottle of this wine was corked so I only tasted this wine over one night. The other wine was tasted over two nights and the notes and score was a composite.