You are here: Home / Archives for Wine Marketing

Some months ago, Josh from Pinotblogger offered free t-shirts. I was among the first to sign up for one but didn’t receive it until about 6 weeks ago. Since then I’ve been trying to set-up a worthy shot of me with it on in public to qualify for Josh’s samples list once his winery gets going. It’s not really t-shirt weather here in Minnesota right now so I haven’t had the chance to get just the right shot.

Imagine my surprise this morning when I read that he was cutting off the list today and would post only one more photo. So I hastily set-up this shot in my typical blogging environment. Hope it makes it just under the wire 😉 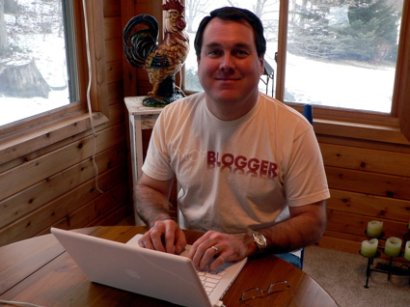 I promise to post a more interesting location with the T a bit later on; perhaps while tasting at ZAP (bet I’d get some looks 🙂

Starting tomorrow and running through Saturday, January 13th, HBO will be providing free bottles of ‘Rome‘ Cabernet Sauvignon at select Italian restaurants in New York, Los Angeles and Chicago to promote the second season of their series of the same name. The promotion is being run by Lime Public Relations & Promotions who’s President was quoted remarking, “The show is all about indulgence, and we just felt this was a great way to bring to life one of the key aspects of the story line.”

The wine is a California bottling with a private label due to a logistical problem of not being able to find an Italian producer (what’s with that?). I’ll give the benefit of the doubt to the agency but it’s clear that a wine lover was not involved thinking this promotion through. For example, if I was consulted on this, I would have immediately contacted some California wineries that produce Italian varieties such as Sangiovese that would have tied into the show closer. The whole “indulgence” angle also bothers me for a couple reasons. First, in the context of a TV series centered on ancient Rome, it implies over indulgence. I also think this is a bit of a dated view of wine as a luxury item and not a part of a lifestyle that ancient, and current, Romans enjoy.

I do think this will create some additional exposure for the show but I don’t think it will create the kind of buzz that other wine promotions have in the recent past. It will certainly be a nice surprise for some diners and, if the wine is good, help the brand but the sample size will be too small for any meaningful impact.

Since I don’t live in any of the cities where this campaign will run, I will not be able to report on the wine. If you happen to be in one of the restaurants and take advantage of the promo, post your notes here. It will be interesting to see if any big city wine bloggers or writers cover this story…

Update 1/10: Dr. Vino has posted about this story; since you live in NYC, why not try the wine, Tyler? On second thought, you are probably right that it’s not worth the effort 😉

In my holiday shopping this year, I’ve noticed a huge range of gift cards in drug, discount and grocery stores. Along with the ubiquitous iTunes cards are offerings from The Gap, Chili’s, Pizza Hut and several other well known brands and chain restaurants.

So why shouldn’t wine be on this list, as well? With sites like WineQ, Bottlenotes and Openmarket Wine now on the scene and more launching early next year, I expect to see something like this next holiday season. It would make a great stocking stuffer for the wine geek on your list.

When I first got into wine, there were television commercials like these creating awareness and demand:[youtube]ITDcf06OUYo[/youtube]

Today, I can’t imagine an actor like Anthony Hopkins plugging Mondavi or Gallo wines on TV. How far we have come in the marketing of wine…

Looking at these spots takes me back to my wine roots, drinking a bit of Paul Masson Burgundy and Emerald Dry. Most days, however, I drank Gallo Hearty Burgundy or Chablis Blanc from huge 3 liter jugs. Haven’t had those wines in years; I wonder if they are still as tasty as I remember them? Perhaps a trip down the jug aisle is in order.

What were your “roots wines”?

While I was grabbing a quick lunch today, I noticed a post over at Hugh MacLeod’s blog about a BBC radio appearance by Stormhoek’ s Andrew Porton. I realized with the time difference that it was only a few minutes out so I tuned into BBC 5’s stream for the interview.

I have to say that the BBC presenter seemed more intent on exposing the offer in question as not what it seemed to be rather than focusing on the key story. In a nutshell, Stormhoek blogged about a “friends and family” coupon at one of their UK retailers and the uptake via word of mouth was quite a bit higher than anyone would have expected. It’s actually enough of a story that it has crossed over into the mainstream media now. This not only shows the power of blogging but also the a key tenant of Wine 2.0 marketing strategy: viral, word of mouth marketing can be quite powerful if done right. In this case, it was a compelling offer (40% discount) that was an exclusive (blurring the lines of who “friends” really are) and disseminated via an A-list blogger in the form of a PDF voucher. The network effect took over from there and now there’s tens of thousands of customers ready to use these coupons.

It’s not surprising the mainstream media missed the point here. They seem more interested in chasing controversy than reporting an interesting business story, but I digress.

I’m hoping this kind of offer spreads the wine retailers in the US. Anyone listening from Surdyk’s, Haskell’s or Solo Vino?