You are here: Home / Archives for Wine Book Club 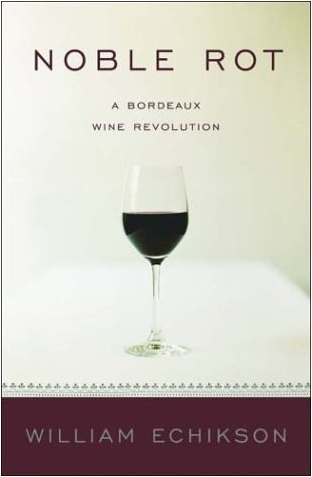 The wines of France’s Bordeaux region have long been a benchmark for quality due to a combination of tradition, terroir and mystique. William Echikson’s “Noble Rot: A Bordeaux Wine Revolution” attempts to lift the veil and show the inside of the Bordeaux wine trade which makes for some fascinating reading.

Mr. Echikson is the Brussels bureau chief for Dow Jones Newswires and a wine columnist for the Wall Street Journal Europe but his narrative here stays closer to the business side of things in his account of the 2001 growing season. Along the way, we are introduced to the movers and shakers of the Bordeaux wine scene, including critic Robert Parker, consulting winemaker Michel Rolland and garagiste Michel Gracia, but the central story is of the Lur-Saluces family of Chateau d’Yquem.

The wines of Chateau d’Yquem are well known to wine lovers as the standard-bearer of Sauternes, the late harvest desert wine made in Bordeaux. The fungus on the grapes, known as “noble rot”, concentrates the juice making the resulting wine lusciously concentrated and sweet but still has plenty of acidity to make you come back for more. My own experience with d’Yquem is nothing short of phenomenal; this is one of those wines you want to just keep your nose in the glass for hours at a time.

As it turns out the Lur-Saluces family is as complex as their wines and much of Noble Rot is devoted to telling their somewhat tragic story. While interesting, I found this part of the book a bit gossipy and liked the vignettes of other characters in Bordeaux better. But at just under 300 pages, Noble Rot makes for a quick weekend read and one I hope more wine lovers will check out.

That’s why I chose this book for the second installment of the Wine Book Club created by Dr. Debs of Good Wine Under $20. In Deb’s review of this book, she focuses on the Bordelaise wine culture and the historical aspects of the story, not surprising for an esteemed history professor from USC.

Richard, The Passionate Foodie, commented on how winemakers need to adapt to change or face the consequences in his review. Good insight into the tradition-laden culture of Bordeaux.

The Dude checked in with his thoughts on Noble Rot and gave it a thumbs up for, “…a) You love you some Bordeaux wine, b) You prefer your history shaken, & with a twist of gossip, c) You are in the wine industry.” Well played, Dude.

Farley came out from Behind The Vines to post her review and highlight the educational aspects of Noble Rot. I, too, learned a lot about what makes Bordeaux tick and why they are able to command such prices in the international marketplace.

Kori from The Wine Peeps gave a rundown of several juicy quotes from the book in her review but concluded that, “…If you are interested in learning more about Bordeaux, the people, places, and history, this could be a book for you, and you can head over to Amazon or your book retailer of choice to pick up a copy. However, if you are looking for a wine guide or basic wine information, I would suggest that you look elsewhere.”

Colin from the Grapefan’s Wine Adventures blog in the UK posted a mixed review of Noble Rot commenting, “…I’m still not sure what to make of it.” He thought the book might be best suited to Americans but ended up giving the work an 84 on the 100 point scale.

I know other bloggers started the book and hope they finish and post their reviews. As they do, I will update this post. Please send me your link if I missed your review or if you post a bit later than my tardy effort.

Thanks again to Dr. Debs for letting me host Wine Book Club on it’s sophomore edition. I’m hoping to see a better turnout on the 3rd outing to be announced next week.

The San Francisco Chronicle has posted a number of German Riesling reviews that would be great for the next Wine Blogging Wednesday in a few weeks. Most of them are $25 or less and several different German regions are represented.

It’s almost time for the next round of the Wine Book Club which I am also hosting. Even if you haven’t started reading my pick, William EchiksonÃ¢â‚¬â„¢s Noble Rot: A Bordeaux Wine Revolution, you can start this weekend and probably have it read by Monday. Or you could read it the next weekend.

Just pick it up soon, read and post your review by April 29th.

I have to admit that I’ve gotten off to a slow start with the Wine Book Club. I still have yet to post my review of Wine and Philosophy as part of the first “spin the bottle” round and I never cracked open the first selection, Vino Italiano. Kudos to David McDuff for a great job hosting the first edition with a great turnout. I hope to carry forward this momentum and now announce the next book in our series.

Bordeaux has always been a benchmark for me as these were the first wines that all the books said I should appreciate when the wine bug first bit me in 1980. After literally cutting my teeth with their wines of the 1970’s (not always too much fun) I fully recognized the importance of Bordeaux when the first 1982’s were released. By then, of course, I was drinking mostly Napa juice but some of these Bordeaux spoke to me in a different way and I continued my wine education.

So the second edition of the Wine Book Club is focused on William Echikson’s Noble Rot: A Bordeaux Wine Revolution. I selected this book because it gives the backstory of what is wrong and right in Bordeaux in an engaging and very readable style. Also, since it’s been out for a few years, it’s very reasonably priced used and available at many libraries.

So join me on April 29th and post your review of Noble Rot (the book, not the fungus). If you don’t have a blog, you can sign up at our new Wine Book Club blog and post there.

Thanks to Dr. Debs for the original idea for WBC and I’m looking forward to seeing who will take up the “spin the bottle” round this time…

Update: After you post, please send me an email with a link to your entry… and I fixed that typo at the beginning of the second paragraph, too ;-)Ã‚Â