A couple months back I noticed that I was getting close to 3,000 tweets on Twitter, the popular micro-blogging-messaging service. It seemed like a good idea at the time to strive to get to this milestone at the beginning of September but also strive to increase my followers on Twitter to match my 3,000 Tweets. After all, Gary Vaynerchuk has over 15,000 followers so how hard could it be to get 3,000?

The answer is nearly impossible.

But it wasn’t for lack of trying. I setup Twitterfeed to retweet my Google Reader shared items and I also shared some wine news from Decanter magazine. I participated in the Twitter discussion of wine but didn’t go out of my way to create tweets for the sake of reaching my goals. I could have probably marginally improved my follower count by running a contest or two but I don’t think it would have made a signfianct difference in the final results.

So this blog post will be my 3,000th tweet — about a month behind my original schedule — but my follower count only modestly increased to 592 (+130 since my challenge began). This tells me a few things. First, there are a limited number of people now on Twitter interested in talking about wine. Gary has certainly crossed over into the mainstream and become an internet celebrity but it’s not because of his discussion of wine but how he uses Twitter to connect with his audience (which is several times larger than the Winecast audience). Second, the Wine Twitter group hangs as a fairly small pack and most of us are wine or winery bloggers. I think this might be another barrier for others to join the discussion.

So I’ve decided to open up the way I follow others on Twitter to include fans as well as those tweeting mostly about wine. I started out doing this to keep my Winecast feed easier to scan and I was also republishing the tweets here (later turned off due to technical issues). But I followed everyone back on my personal Twitter account to sort of abide by the norms of the service. This change will not raise my follower count but it will open up some interesting ways to use the service to connect with readers and listeners.

I’m hoping this change will encourage people to ask me more questions and ultimately lead to increasing my overall reach… and I’ll get some contests going, as well. Let’s see where I’m at on New Years Day with this new approach. 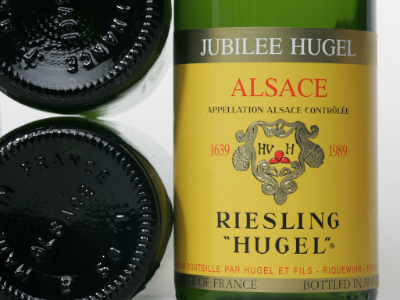 Next week I will be tasting some wines and posting my notes on Twitter. I’ve done this for a while now but this is the first time I’d like you to join me live.

And I really mean live as I’ll have five bottles of Hugel wine with me in Healdsburg next week and, if you are close, I’ll have a glass ready for you. If not, then join me on my new Ustream channel.

The tasting has been organized by Bin Ends Wine, who have provided the samples and arranged for my interview with Etienne Hugel. Etienne will be joining me on Twitter from Alsace for the tasting on August 21st at 7pm EST/4pm PST.

For those in Northern California, I will be at the Michel-Schlumberger Estate with the Hugel wines and invite all readers and listeners to join me to taste these wines live. We’ll start with the Hugel Gentil 2006 at 4pm local time and conclude with the Gewurztraminer Vendange Tardive 2001 sometime before 6pm. After the tasting, let’s get some dinner in town.

Disclosure: My company works with Michel-Schlumberger currently but we are tasting another producers wines there.

I’ve been tweeting about wine for a long time now but have not really set any goals for my participation.

From now until Labor Day (a “bank holiday” in the U.S. for UK readers), I will be striving to get to my goal of 3,000 tweets AND 3,000 followers. Since I only have a bit over 2,000, this will be somewhat of a challenge given the 34 days involved, but I will try to post enough to get to that goal. And not just be trivial about it.

But my goal of 3,000 followers is a ridiculous task unless there is something I don’t yet know or Gary takes a liking to me.

Whatever the case, I will try to reach both goals.

As I begin, my follower count is now 462… wish me luck on my quest. I’ll pull out every trick in the book but I will need a LOT of help to reach my goals.

We have two daily newspapers here in the Twin Cities and today the St. Paul paper published a story on Twitter, in Twitter format. I was the local ‘wine nut’ Twittering tasting notes from my recent Napa Valley visit. More on the wine Twittering movement a bit later, in the meantime check out my 15 minutes of (local) fame 😉