You are here: Home / Archives for Syrah

I tasted today at Pax Mahle’s new venture, Wind Gap, and his Syrah stood out from the other wines, particularly from Griffin’s Lair Vineyard. That’s to be expected since his method is almost the same as when he made wine, and built his reputation, at his eponymous winery. The difference is the fruit is not picked so late to make almost over the top wines that have challenges aging and staying in balance. I was impressed with his evolution as a winemaker and will post my notes on all the wines tasted shortly.

But as I tasted the rich yet aggressively mineral Griffin’s Lair Syrah I reflected on how difficult this wine would be to sell. First, this is not a wine someone new to wine would appreciate. Complex in aroma with plenty of bacon and black and blue fruits, the flavors are tight with a minerality that make it difficult for many mainstream wine drinkers to appreciate. But this Syrah was one of the best I’ve tasted in a long time and more closely paralleled Syrah from the Rhône. And it’s price, $48, seems very fair for the quality.

Even with that going for it, Syrah at this level is challenging to sell and I can’t figure out why. So when I read Gerald Boyd’s post at winereviewonline.com today I was hoping there would be something there that explained it. Sadly, he’s as perplexed as me.

So what’s the deal? 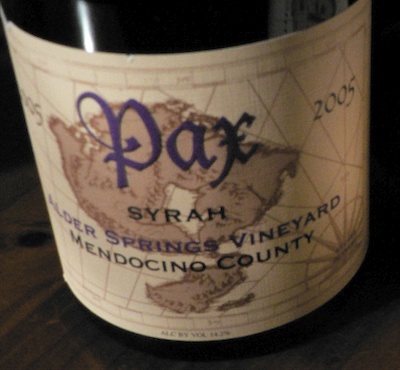 Before I begin this review, I have a confession to make. I really don’t like cute, critter or otherwise “manipulated” labels designed to entice people to select wines on grocery store shelves. And I vote with my wallet by not purchasing these wines. There are times when I’m tempted, when I know and respect the winemakers for example, but I’ve successfully steered clear of all of these wine over the 4+ years I’ve been blogging and podcasting. I know I’m in the minority here, since there are so many of these wines on the market, so this strategy has got to be successful. 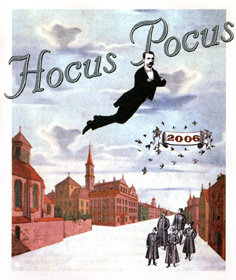 So I was amused when Jill from domaine547 sent me a wine from Black Sheep Finds called “Hocus Pocus.” This was one of 3 bottles won as the prize shared with Richard from The Passionate Foodie for getting 20% of the Wine Spectator’s Top 10 Wines of 2008 correct. This is precisely the type of wine I would shake my head and pass over on the shelf so I was curious how the wine in the bottle actually tasted.

Black Sheep Finds is a winery run by Amy Christine and Peter Hunken. Their bios on the Black Sheep Finds website doesn’t give up too much other than they both love wine (and maybe like each other quite a bit, too). Dr. Debs has a bit more background in her review of their 2005 vintage over at Good Wine Under $20. Besides Hocus Pocus, their Syrah brand, they also offer a Sangiovese blend called “Dalla Pancia” and a Cabernet Sauvignon called “Genuine Risk”. Interesting, if not a bit calculated, branding from the Mollydooker school of wine marketing. Everyone has to have a story to tell to sell their wine and this one is a good one made better by some pretty tasty juice in the glass. I’ve also got to give them props for focusing on the value category which will be one of the major trends in 2009 (more about that tomorrow).

Thanks to Jill from domaine547 for this wine, which seems to be sold out there (thus my WineZap link above). It shows that maybe I should not judge a wine by it’s label and pick up more of these kinds of wines. I’ll definately be on the lookout for Black Sheep Finds wines next time I see them.

I’m back in action on the 4th anniversary of my first podcast with a high-end Carmenere-led blend from Chile.

Every wine lover has a progression of experiences from the jug wines or fighting varietals they started with, through the wines of Germany, Bordeaux, Spain and Italy before they get to Rhone blends (the end goal is always Burgundy for some reason). In recent months, I’ve been drinking mostly southern Rhone-style blends from France, Spain and California. Most of these have been red with Mourvdère (or Monastrell) based wines a favorite. So I was pleased when Jeff (a.k.a. El Jefe) at Twisted Oak offered some samples of his new “River of Skulls” MourvÃ¨dre/Syrah blend. 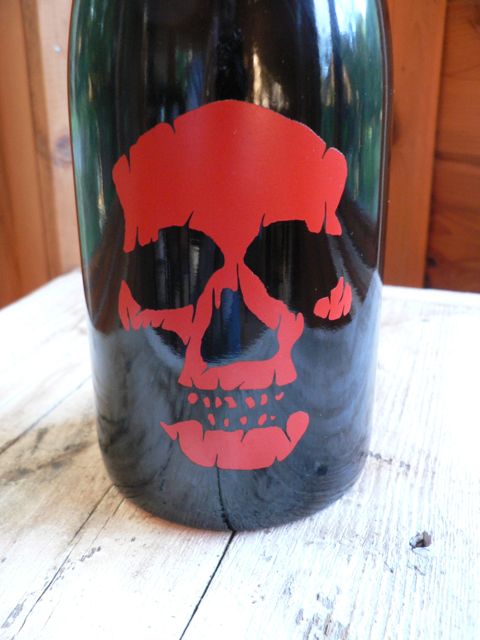 The first thing that stands out is the striking package. The red skull literally burned into the bottle signals this as something special. If you are looking for a wine for your Halloween party, look no further as your friends will be talking about both the bottle and what’s inside. The striking name is not some sort of commercial play for late October sales but a homage to local history near where the grapes were grown. It seems a Spanish Lieutenant exploring the area in the early 19th century happened across a number of skulls littered on the river bank. Being a practical man, he named this place “El Rio De Las Calaveras” or, literally, the “River of Skulls”.

The grapes for this wine were grown in the Dalton Vineyard only a short distance from the Calaveras river. Along with seven other varieties, Dalton is planted with the Spanish clone of MourvÃ¨dre (called Monastrell in Spain). Although more known in the wine world as one of the 13 grapes of the Côtes du Rhône, Mourvdère is actually a native of Spain, most likely Catalonian. The Mourvdère, which makes up 90% of the blend, was fermented with about 25% whole clusters which adds to the backbone of the wine. Later, 10% Syrah from the same vineyard was blended to provide some additional structure and complexity. Nineteen months spent in a mixture of new and neutral oak barrels (50/50) provides the seasoning here.

Like some other wines I’ve recently tasted, River of Skulls is only available on an allocated mailing list. Since I just was able to sign up myself it’s still open, but I’d suggest you do this soon before the wine is sold out.

Twisted Oak, “River of Skulls”, Mourvdère, Dalton Vineyard, Calaveras County ($35 retail/$28 to club/received as sample) – Dark ruby in color with aromas of black cherry, fennel, tobacco, clove, and vanilla. Bold and concentrated blackberry and dark cherry fruit joined by cracked black pepper, some tar and sweet oak finishing long with moderately firm tannins. I’d recommend laying this one down for 2-3 years and see what emerges as there is plenty of fruit to stand up to the alcohol. I’m holding my second sample back a couple years and will blog my notes here sometime in late 2010.