You are here: Home / Archives for Shiraz

Not too long ago I drank quite a bit of Australian wine, particularly Shiraz. Given that this grape, also known as Syrah, expresses greatness in the Barossa Valley I could not pass an opportunity to revisit this region for this months’ Wine Blogging Wednesday. Our host, Adam from Wine Zag, proposed we look for any wine from Australia’s Barossa Valley but for me only Shiraz would do, much the same way only Cabernet would do for Napa Valley. One other limitation was to choose a wine for $30 USD or less. I’m well aquatinted with great values from Barossa but have not tasted any lately so I was a little concerned as I entered my local wine store to explore the options available this week.

The main reason for my exile from Barossa and most of the wines of Australia of late has been value. There are many great wines made in Australia but far fewer under $30 than in the past (at least it seems to me). Some of this is due to shipping costs; some of this is due to exchange rates. Today the best bang for the (American) buck comes from the Iberian peninsula or lesser known parts of Italy and France. Even California, Washington State and Oregon are bringing the value in these recessionary times. But there still are some producers who are managing to bring the value from Barossa even today.

One of those is Schild Estate, a family run winery in Barossa that over delivers value if judged by the wine I tasted this evening. Established in 1952, this winery produces a range of wines but with an emphasis on Shiraz. And after tasting their entry level Shiraz today, I can see why they lavish so much attention on the variety. It is because it’s delicious.

Schild Estate Wines, Shiraz, Barossa 2009 ($18) – Dark purple in color with aromas of cherry, plum, bacon, and black licorice. Round in the mouth with concentrated blackberry, plum and black pepper flavors finishing with savory tannins. A very nice expression of Aussie Shiraz at a stunning price.

Thanks go to Adam for hosting this month and for provoking me to taste a Barossa wine and blog about it. Stay tuned for next months edition of our global virtual tasting to be announced soon.

It has been nearly three years since I last hosted Wine Blogging Wednesday but my choice of theme was easy. Wines made from Rhône varieties are among my personal favorites and I was hoping to learn about many more new wines from participants this month. There were 25 bloggers posting reviews from all over the world. Thanks again to all who took the time to participate and here they are in the order I learned about them:

So that’s it. I count 25 bloggers and 28 wines tasted. Most of these were red but 8 whites were also reviewed. If I somehow missed your entry, please let me know in the comments and I will update this post.

Thanks again to Lenn for letting me host once again. And without further ado, I pass the baton to Richard from The Passionate Foodie for a very special edition of Wine Blogging Wednesday next month. 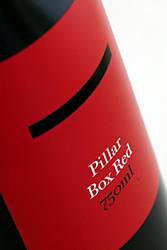 I first heard about this wine on the 3 Wine Guys podcast (thx, T-bone) so I picked up a bottle when I saw it at a wine store this summer. And I’m glad I did as it really shows off what blending young vines can do for a wine.

This is a blend of Shiraz, Cabernet Sauvignon, and Merlot from noted winemaker Chris Ringland. I’ll have to check out his other efforts given what magic he casts on this modest wine.

Henry’s Drive, “Pillar Box Red” 2005 ($10) – Deepest purple-black in color. This one needs to unwind a bit before it shows it’s best but once fully open it features nice black and red fruit aromas with fennel and a bit of chaparral. Full and rich black cherry and strawberry fruit gives way to a bit of licorice, vanilla and spice on the finish. A delicious fruit bomb for everyday drinking.

The second wine tasted on my visit with Cameron Hughes in late May. This one is more in line with what you would expect in an Aussie Shiraz; rich, bold and powerful. One for the cellar.

Dark purple in color with blackberry, white pepper and fennel aromas. Rich and bold in the mouth with blackberry jam, mint and licorice flavors finishing with firm tannins. I’d lay this one down for a few years to let the tannins soften a bit or decant for 2-3 hours before serving. Another stunning value.

Being the “wine guy” with family and friends, I’m often asked about the best values. In fact, part of the reason I started this blog and podcast was to share these tips. Although I find great values to write about here quite often, what I encountered with the following wine falls into the “extreme value” category.

The reviews that follow are from a podcast I recorded with Cameron Hughes the last time I was in San Francisco. We covered his approach, sourcing practices and business model for over an hour; about 40 minutes of which was recorded. As fate would have it, this is the first podcast recording to inexplicably vanish since I started doing this almost 3 years ago. It’s really a shame, but Cam has agreed to re-record for an upcoming show in the next week or two. But I’m posting these reviews now because I don’t think there will be any wine left in two weeks time.

Cameron Hughes is a nÃƒÂ©gociant who specializes in bringing the best value for money to wine lovers. He does this by finding the best juice available — increasingly from outside of the U.S. — and blending and bottling under his label. He keeps his costs low by only selling online or through Costco stores here in the U.S. who take a much lower markup than other wine retailers. The result are some stunning wines at prices that make you wonder what he’s thinking. For example, the wine here could stand up to a $50 Shiraz and hold it’s own; Cam sells it for $20. When I asked him about his pricing practices, he smiled and said, “I’m making friends…”; then he opened this wine for us to taste.

Very dark purple in color with aromas of blackberry, mocha, licorice and spice. Jammy and rich in the mouth with blackberry fruit and black pepper flavors finishing with moderately firm, but well integrated, tannins and good acidity. This is a big wine but it has massive fruit to balance the alcohol and a concentration that seems to only come from old vines. I’m going to let my bottles rest for a year or two before enjoying but it’s drinking very well right now.

I would suggest you buy this wine sooner rather than later as only 500 cases were released yesterday. Visit Cameron Hughes online to order (no Costco for this one).