You are here: Home / Archives for Restaurants

I thought I would post a note about the first of several excellent restaurants we enjoyed on our tour of Spain. Since food was nearly as important as the wines presented during the five days hosted by The Osborne Group, I think this is a good place to start my coverage of the trip. 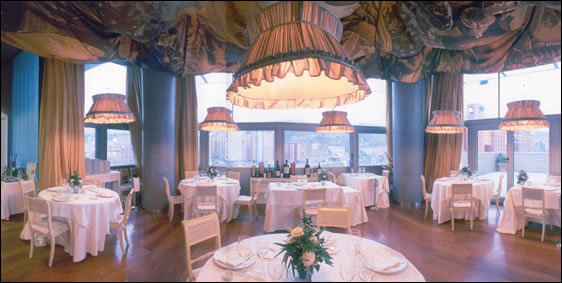 After traveling for over 17 hours I found myself in a taxi rocketing into downtown Bilbao, Spain at about 8:30 pm local time on Monday, June 25th. This was our scheduled time for dinner to begin, very early for Spain as I would find out, but most likely due to our travel schedules. After dropping my bags in my room at the Silken Gran Hotel Domine, I took a taxi for a short ride to Restaurante Etxanobe. There I met my hosts, Alberto de la Iglesia and Africa Romero from Osborne International and Jenn Turner from their U.S. PR firm, along with the other journalists on the trip, Wini Moranville, Charyn Pfeuffer, Glen Putman and Scott Clemens.

Since it was a early for dinner when I arrived a few minutes before 9:00 pm, the restaurant was empty except for a large round table in the center where I met my traveling companions and hosts. After quick introductions, the dinner immediately began with a trio of appetizers matched with Bodegas Montecillo Blanco 2006. The wine, made from the native Viura grape grown in Rioja, matched well with each starter. But to me, the final appetizer of scallop and leek was best with the crisp citrus flavors of the Viura nicely complementing the sweetness of the fresh scallop.

The other highlight of the dinner was chef Fernando Canales’ signature, Solomillo a distancia Ã¢â‚¬â€œ Sirloin grilled Ã¢â‚¬Å“at a distanceÃ¢â‚¬? paired with Montecillo Reserva 2001. This would be the first of three times we would taste this wine made from 100% Tempranillo and it’s power and grace is impressive holding up with the perfectly prepared rare tenderloin. Chef Canales came to our table in the now filled restaurant to explain that the beef is grilled slowly on a custom built chrome grill of his invention where the meat is at more of a distance than normal. Whatever the trick, this was one of the finest pieces of beef I have ever had and the wine harmonized well with the flavors of the meat. 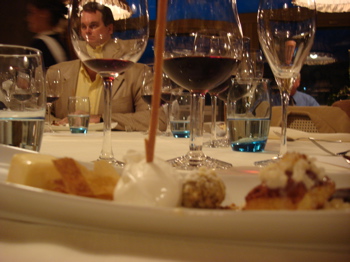 The final highlight was the dessert sampler; several bites of different sweets paired with Osborne Pedro Ximenez 1827 Sherry. A very nice way to end a most memorable meal and a great way to start my conversion to the wonders of Sherry. Chef Canales then autographed his cookbook for everyone before treating a few of us to an impromptu chocolate tutorial and tasting.

The next time I’m in Bilbao I will definitely stop by for another meal at Restaurante Etxanobe. The food and service are world-class. I can see why the folks at Obsorne picked this as our opening dinner venue but there would be two other very memorable dinners ahead in Madrid and Jerez which I will cover a bit later in the week.

Next, I will write and podcast about my visit to Rioja and Bodegas Montecillo; stay tuned…