You are here: Home / Archives for James Suckling

My morning routine starts with visits to my various email accounts and concludes with a quick scan of my Winecast Gmail. If I have the time, I sometimes open my Google Reader to see what blog posts have come in overnight. This morning I stopped in my tracks at a post on Vinography which pointed to James Suckling’s announcement Mike D., of the hip hop group The Beastie Boys, would be a contributing blogger.

If this were early April I would have guessed Alder was playing some sort of a prank but this story is absolutely true. And if I put my marketing hat on for a moment, this move seems pretty astute as having a celebrity reviewer who is a Gen-X icon and still has street cred with Millennials will boost traffic to the site. But I’m not sure how the conversion to paying customers will play out (my gut says not so well).

My only question here is does this work the other way and will wine bloggers become rappers? My money is on 1WineDude Joe Roberts. 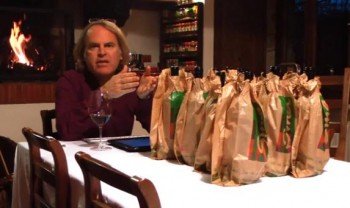 Every once and a while the debate about the 100-point scale swirls around the wine blogosphere (and now wine twitteratti). The latest flash-point is wine critic and recently turned blogger James Suckling who posted a video on his site yesterday detailing how he evaluates wine. Different than a lot of wine bloggers, but consistent with the norms of wine critics like Robert Parker, Suckling tastes blind in large batches. This approach is certainly an efficient way to taste through dozens or even hundreds of wines in a morning but we don’t get any sense for how the wine will hold up over a few hours or after decanting. This is why I literally live with wines I’m reviewing over 2 and sometimes 3 days. But this system would slow a writer down significantly if you are tasting 50 wines at a go so we accept the “moment in time” approach used by most wine critics.

And that brings me to the dirty little secret about the 100-point scale; the myth of precision. Mr. Suckling reviews his approach to applying scores in his video which is very similar to my process. But each area we break down still has far too much wiggle room and can easily make an 89 wine a 91, and vice versa. The same thing applies in my grading papers when I teach marketing. This objectiveness is at the heart of why I was proposing a new rating scale for wine bloggers a while back.

The only way to somewhat smooth the ratings variability is to taste a wine over the course of time in the same tasting conditions and normalize scores or taste a boatload of wine so the reader can get a sense for the reviewers’ palate. The reason I use the 100-point scale is because readers ask for it and, like it or not, it will be with us for a long time to come. But I don’t think it’s a precise instrument.

What do you think?

It’s been interesting watching the reaction to James Suckling’s retirement from the Wine Spectator announced a couple weeks ago (note: I wrote this post 11 days ago but only posting it now due to some issues with my blog software). I first found out about it on Twitter where the discussion was a mix of shock and congratulations to Mr. Suckling directly. And while other wine bloggers don’t see the importance of this event, I think it’s a big deal as it makes the future of wine criticism a bit clearer.

Longtime readers know where I stand about where wine writing and criticism is going. Without rehashing my previous post, let’s just say that the current print model is not a sustainable long-term model for any wine publication. But the rub is that it pays the bills now and makes the transition to the future of online delivery via mobile digital devices a bit of a timing problem for traditional wine pubs. I think the folks at Wine Spectator and Wine Advocate get this but will probably not pick the optimal point to pivot their business models since the point of optimal profits with their current model is difficult to predict. Therein lies opportunity for those without these existing concerns.

And James Suckling is one of just a few people in the wine industry who can take advantage of this transition. Internationally known and respected, he can plant a blog and wine review database in a short period of time and begin to make money through subscriptions. He has the connections and means to start building his non-Wine Spectator owned content immediately. And I’m sure if he just focused on Bordeaux he would probably make more money than being on the Wine Spectator staff.

But this path is open to a handful of professional wine critics who have an existing brand. What about the critics of the future?

Clearly there is opportunity for anyone with the ability and passion to build an online audience. But there is also the issue of access to a reasonable amount of wine to gain credibility and a critical mass of reviews. Although most wine bloggers get a fair amount of samples to review these days, it’s not even close to the amount professional wine critics have the opportunity to taste. Sure, we can attend trade tastings but these conditions are not optimal for serious reviews.

That said, I think there will be another Robert Parker-type story where someone will move from part-time wine reviewer to full-time critic. The only difference is this critic will not build their brand at places like the Wine Spectator. The future of wine criticism is a bit clearer after the events of two weeks ago; at least to me. I wish James Suckling the best of luck in his future endeavors and will no doubt return to this subject in future posts.