You are here: Home / Archives for Chardonnay

At the beginning of June I wrote a post in response to Pinotblogger Josh Hermsmeyer’s wine blogger contest. Basically, Josh challenged us to write about what motivates us to blog and if the role of a wine reviewer is to prescribe the ways in which a wine should be made or just write about what’s in the bottle. Had I not waited until the last moment to post my thoughts, or had seen Josh’s tweet about my lack of a wine review, I might have been in the running for the prize (yes, I’m one of the wine bloggers Josh calls out here). Ironically, the wine I would have chosen for that post would be from a winery right in Josh’s backyard in Sonoma’s Russian River Valley, C. Donatiello Winery.

I was not familiar with C. Donatiello Winery before they tracked me down on Twitter and sent a couple samples. The winery is in the same building as the venerable Belvedere Winery which I remember from the 1980’s. Chris Donatiello is the owner and marketer while Webster Marquez, formerly of Williams Selyem, is the winemaker.

There seems to be two schools of California Chardonnay these days. On one hand you have the full malolactic “butter bombs” that are usually further marred by being over oaked. On the other, there is a growing trend of “naked” Chardonnay that celebrates the purity of fruit with the only wood contact being the cork (if they use a natural one at all). There are, of course, other approaches. Some iconoclasts subscribe to the Chablis or Burgundy model of partial or no ML and mostly neutral oak with extended lees contact. In my experience this last approach makes the most interesting California Chardonnay as I like my whites with lots of acidity so they pair well with food.

So that’s what makes this wine so interesting to me. Grown in Sonoma’s Russian River Valley, this wine spent 9 months in 50% new and 50% neutral French oak. And it shows in the nice mouth weight and complexity of flavors. But unlike a lot of it’s full ML brethren, this Chardonnay still has enough acidity to clean the palate and pair with food. I’ve written here before that I don’t enjoy what ML usually does to Chardonnay and other white varieties but I can respect a craftman at work. Unlike some other wines I’ve reviewed, I really like this one a lot and will be seeking out several more bottles for my cellar.

George and Elsa Vare love the white wine blends of Italy and have devoted Vare Vineyards to the pursuit of making this style of wine in Napa Valley. They are not new to the wine business having co-founded Luna Vineyards and this experience shows in the bottle. I first tasted Vare wines at the recent Wine 2.0 event at Crushpad in San Francisco and was excited to try their very limited production Bianco Riserva 2005 as part of the Wine Spy for a Day program. The Wine Spies are also offering free ground shipping on 4 bottles or more for all Winecast readers by entering promotional code “WINECASTLUVSME”. 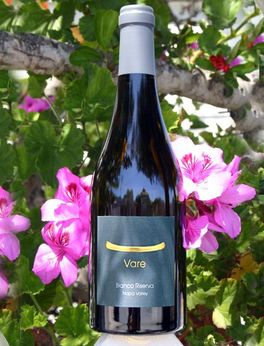 A blend of 40% Ribolla Gialla, 25% Pinot Grigio, 22% Tocai Friulano, 10% Sauvignon Blanc and 3% Chardonnay grown in Napa Valley, Vare Bianco Riserva 2005 is unique in several ways. First, this is the only winery with plantings of Ribolla Gialla in the US, a variety from Italy’s Friuli Venezia Giulia region where it’s blended with Tocai Friulano. The wine spends an extra few months in once used French Oak barrels than it’s sibling Bianco which produces a more complex wine both aromatically and in it’s flavor profile. An finally, this is one of the few wines packaged in 500 ml bottles as requested by Thomas Keller’s French Laundry restaurant. This results in one of the best Cal-Ital white blends I’ve tasted to date.

Vare Vineyards, Bianco Riserva 2005 ($45/500ml/sample) – The straw color is a result of barrel fermentation and aging but the aromas are not overpowered by the influence of wood. This wine has a very pleasing bouquet of citrus, tropical fruit, walnut and a hint of clove. Complex but refreshing grapefruit and pineapple fruit flavors finishing with nice acidity and a creamy, lees element. An excellent food wine and would make a great starter to an Italian meal but with only 20 cases produced, you better act now.

Buy this wine at Wine Spies for $35 today only!

And don’t forget to enter discount code “WINECASTLUVSME” when you check out for free ground shipping on orders of 4 bottles or more.

Thanks to Agent Red for recruiting me and Agent White for selecting such a nice wine to taste. Look for other wine bloggers to be Wine Spies for a Day in coming days.

Our monthly virtual tasting event turns three today with founder Lenn Thompson from LENNDEVOURS again hosting. Lenn’s theme of “Naked” Chardonnay is perfect for this time of year when the heat of summer has us drinking more fruity white wines. But Chardonnay is most often found with some oak aging so finding a non-oaked wine takes a bit of investigation although some producers are labeling their wines as “unwooded”, “no-oak” or even “naked.”

Chardonnay is a delicate grape that is easily dominated by other varietals through blending or, more often, with the addition of French oak. Mostly identified with the great white wines from France’s Burgundy region, Chardonnay can be made in a number of styles depending upon the techniques used by the winemaker. If they are looking for a soft, buttery style, malolactic fermentation (a.k.a. “ML”) is used. For creaminess in the mid-palate and finish, lees aging is done. And to add toast, vanilla and a bit more complexity in the aromatics, barrel fermentation and/or oak aging is added. The default style in California Chardonnay is oaked — some say too heavily — but things are changing in this regard.

My personal preference in Chardonnay is a light touch of oak or no oak at all. My favorites come from France’s Chablis area when fruit, minerality and acidity are center stage and oak is most often in the background or not used at all. So I immediately thought of Chablis when Lenn announced this theme but didn’t have a chance to visit some of the Twin Cities’

urban wine stores to buy a bottle. The wine selected here was chosen from the very few in stock that seemed to be unoaked from their label description and I confirmed this by visiting the winery website where oak is not mentioned in any of the marketing materials. If you are using expensive oak barrels, or even chips, in your Chardonnay you will mention this in the winemaker notes. And the aroma and flavor profile here is consistent with a stainless-only approach.

Hess Collection, Chardonnay, Monterey 2005 ($11) – This 100% Chardonnay features grapes grown in the cooler Monterey AVA in California. The color is a very pale straw with with a tinge of green. Lean citrus and pear aromas with a hint of nuttiness. Simple pear and pineapple flavors finishing clean and soft. An easy drinking quaffer and good value.

Thanks once again to Lenn for three great years of Wine Blogging Wednesday. I’m sure we will see a lot of great values this time out and a good turnout given the availability of un-oaked Chardonnay these days. Let’s hope this style becomes a trend in the broader market.

There are many stories in the history of Napa Valley that capture our imagination but the tale of Charles Shaw is one of urban legend. Shaw, a dentist from Chicago, started his eponymous winery in 1974 and produced some good quality wines from Valdiguie, Gamay Noir and Pinot Noir. In those days these grapes where blended and sold as either Gamay Beaujolais or Napa Gamay to suggest the wines of Burgundy’s Beaujolais area. From accounts at the time, the Charles Shaw Gamay Beaujolais was one of the better versions most likely because the wine contained the true Gamay Noir of Beaujolais. These grapes are now used in Andrew Lane’s Gamay Noir reviewed on Winecast 70.

Years past and Shaw struggled to make a profit as more well known varieties emerged from Napa Valley such as Chardonnay and Cabernet Sauvignon. After a divorce in 1991, Shaw sold the winery assets and vineyards to Charles Krug and the brand name to Bronco Wine Company. That would have been the end of the story if Bronco’s Fred Franzia hadn’t pulled the brand from mothballs in 2002 to make the wildly successful “Two-buck Chuck” available at Trader Joe’s markets across the U.S. These wines, made from Central Valley grapes, are bottled at Bronco’s Napa, California factory to provide the word “Napa” on the label. Many consumers have been unfortunately misled by this and assumed the wines are actually from the prestigious Napa Valley AVA and are unbelievably good values. Out of curiosity, I have tried many of these wines and found them to range from simple but drinkable (Shiraz, Merlot, Cabernet) to strange (Sauvignon Blanc) to flabby and thin (Chardonnay). But for $2 a bottle, I guess you get what you pay for.

I wouldn’t be writing this review if for not a chance encounter with Dr. Shaw while in Napa this week. It seems he is not very happy with all the success around the wines that bear his name so he’s out to prove that world class wine can bear a Charles Shaw label. His trademark lawyers have even found a loophole that allows him to use his name and not go the way others have after selling their brand name. It seems that Bronco only had a 15 year exclusive on the name and Dr. Shaw is wisely making some subtle changes to the winery name and label art to help consumers distinguish the new wines.

Made from grapes grown in Napa Valley these wines are made in very small quantities and are only available to the discerning few on a mailing list. From the four barrels of Chardonnay I sampled this week, I expect these wines to attract a significant cult following. Also produced are a Carneros Pinot Noir and Gamay Noir from Napa’s Oakville district.

Charles F. Shaw Winery, Chardonnay, “Old Vines”, Wild Horse Valley, Napa Valley 2006 (Barrel sample) – Pale straw color with floral pineapple, flint and toasty oak aromas. On the palate there are complex layers of butterscotch, fig, apricot and pear flavors that are very well balanced. A truly magnificent Chardonnay that will surely reclaim the Shaw name in the wine world. No word on the release price but I expect it to among the highest in Napa.

Wolffer Estate Vineyards, “La Ferme Martin”, Chardonnay 2004 ($13.50/sample provided by the winery) – Light straw-green in color with aromas of citrus, pear and a touch of oak. Crisp citrus and green apple fruit together with a nice minerality and complexity from the lees aging. Finishes very dry with racy acidity making this a full-on food wine. This seems to have more weight in the mouth than the 2003 and a bit more fruit. If I lived closer to the winery, or if I could buy it locally, this would likely be my house white wine. A spectacular value in fruit driven Chardonnay and I also appreciate the lite 12.5% ABV 🙂 Score: 8.5+/10

Thanks, Lenn, for getting the samples sent to me.