You are here: Home / Archives for Carignon 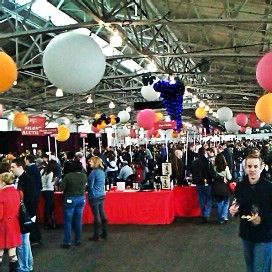 Another ZAP has come and gone and now is the time to sit back and take a look at the notes made during both the Grand Tasting held Saturday, January 29 and the Flights seminar on Friday, January 28.

These are the best wines I had the opportunity to taste but is just a snapshot of 85 wines I happened to select. Many of these are wineries I had never tasted but some are old standbys. And I didn’t make it to the main Ridge or Turley stands so who knows what great wines they were pouring. To keep things diverse, I have selected the best wine of the producer but when I encountered more I will mention them in my commentary. Some wines don’t yet have pricing information but I will call and see if I can fill this in next week.

The following 20 wines capture the best of California Zinfandel or Mixed Black blends that I rated 4 out of 5 stars:

Steele Zinfandel, DuPratt Vineyard 2006 ($24) – This was my first taste of the well regarded DuPratt Vineyard, a small 80 year old patch of Zinfandel in Anderson Valleys’ Mendocino Ridge AVA. Plush blackberry and black raspberry finishing with nice acidity and supple tannins. An outstanding value in a more elegant style of Zin.

Four Vines, Zinfandel, Dusi Vineyard 2008 ($34) – The folks at Four Vines certainly have some attitude but they make some of the best Zinfandels from the bottom to the top of their line. Near the top sits the distinctive Dusi Vineyard from Paso Robles. Bright black raspberry fruit with a nice earthiness on the long finish. I also thought their 2008 Biker and Martinelli bottlings were delicious.

Ridge Zinfandel, Lytton Springs 2001 ($35-ish) – This is the vineyard that single-handedly got me deep into wine and it still speaks to me today. Tasted during the ‘Flights’ seminar along with their 2008 bottling, this wine exhibited the Claret character of an older Zin while still maintaining the blackberry, dark cherry and mineral notes the vineyard is known for. The 2008 Lytton Springs is also a delicious wine that I hope will taste as well as the 2001 is now showing in 2018.

Bucklin Zinfandel, Old Hill Ranch 2007 ($34) – At 159 years old, Old Hill Ranch is the oldest vineyard in Sonoma and probably in California. A classic field blend of Zinfandel, Grenache, Alicante Bouschet, Petite Sirah and more than 30 other varieties, the vineyard produces just 1.5 tons per acre. As a result, the wine is rich and complex with blackberries and cassis finishing with cracked black pepper and  firm tannins. The Ravenswood Old Hill Ranch 2007 tasted with this wine was nearly as good with perhaps a bit more boldness.

Robert Biale Zinfandel, Founding Farmers 2009 ($-) – The Biale table had barrel samples, and this wine from bottle, all from the 2009 vintage. From the wines tasted, this producers’ reputation for fine Zin is assured. Rich blackberry and white pepper finish long with silky tannins. No, I have not heard of this designation before and didn’t ask the price.

Bedrock Zinfandel, Dolinsek Ranch 2009 ($-) – Super rich and concentrated brambles, blueberry and spices. The 2010 Monte Rosso barrel sample was similarly off the charts. Made by Morgan Twain-Peterson, son of Joel Peterson but he’s got his own thing going on with the field blends.

Mazzocco Zinfandel, Pony Vineyard, Reserve 2008 ($50) – Holy crap; how could I have missed this producer until now? Perhaps it’s the small lots of single vineyard Zins that are not available to many outside of California for good reason. I tasted several vineyards and Pony was my favorite both in the regular (and sold out) release and this new-barrel lavished version. Black raspberry and blueberry fruit with cocoa and vanilla. I was also partial to 2008 Maple Vineyard. Good thing they have a boatload of other Zins on their website.

Hendry Zinfandel, Block 28 2007 ($30) – This producer makes three bottlings from different parts of their property. But each time I’ve tasted them, the Block 28 Zin shines through with rich blackberry, blackcurrant and spice. This only slightly overshadowed the fine Blocks 7 & 22 2007 which is also delicious.

Seghesio San Lorenzo 2008 ($60) – Made in very small quantities from a heritage vineyard, this wine was the highlight of the Mixed Blacks stand for me. Rich boysenberry and black raspberry fruit layered with spices finishing long with good acidity. Sadly this wine is already sold out to their wine club members.

Ravenswood Icon 2008 ($70) – Another standout from the Mixed Blacks stand, this wine is only a quarter Zinfandel with Carignon and Petite Sirah comprising most of the blend along with about 20 other unnamed black grapes. The result is a bold and spicy mix of blackberry, black raspberry, blueberry and cracked black pepper.

Proulx Dimples 2008 ($38) – The final Zinfandel blend in the roundup, this wine is made from Paso Robles fruit. The nearly 40% Zin is joined by equal parts Petite Sirah and Syrah making for an interesting mix. Jammy red and blue fruit with vanilla and black pepper finishing with plush tannins.

Storrs Zinfandel, Rusty Ridge 2006 ($30) – Complex aromatics of black raspberry, smoke and tar announce this wine as something special. And the blackberry, black raspberry and plum flavors complete the delicious package with spice and pepper.

Acorn Zinfandel, Alegria Vineyard 2008 ($35) – Big, rich and concentrated blackberry, raspberry and mineral flavors just balances the alcohol. Not sure if this will age well but it’s drinking very nicely at the moment.

Chiarello Family Zinfandel, Felicia 2009 ($50) – Celebrity chef Michael Chiarello also knows a thing or two about wine. And while I usually favor the rich and expressive Giana bottling, I only had the chance to taste the bottle of Felicia in the Zin Zone. And this might be the best I’ve tasted from this vineyard with jammy boysenberry and blackberry fruit finishing with a nice touch of earthiness.

D-Cubed Zinfandel, Howell Mt. 2007 ($37) – Another old Zin standby, the Howell Mt. from D-Cubed is one of my personal benchmarks for the variety and the AVA. Black cherry, raspberry and chaparral finish with moderate tannins and a satisfying mixture of spices.

J. Rickards Zinfandel, Old Vine, 1908 Brignoli Vineyard  2008 ($28) – My final selection here was a recommendation from Alder Yarrow of Vinography who I ran into at the “Zin Zone” media room. This was among his producers, “flying below the radar,” and might be the best value of my roundup. Bold and earthy with classic blackberry fruit flavors finishing with black pepper and smooth tannins.

Many of these wines are yet to be released while others may be available from the winery website. Since there are so many here, I have not included my customary WineZap links but you can search from the form below:

For expanded coverage of wines tasted at ZAP 2011, be sure to sign up for my newsletter on the right sidebar. The inaugural issue will be published next week. And watch the podcast feed, too.

Disclosure: I received a media pass to all the ZAP events.