You are here: Home / Archives for ah-so

Most of the time wine lovers take corkscrews for granted. We regularly take them out and open bottles without incident. But there are times when special weapons and tactics are needed to prevent wine disasters. 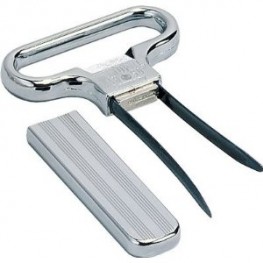 Such an event occurred here this evening when I was opening a double magnum. Large format bottles are always a problem with corkscrews (the ones with actual screws, that is) but I was hopeful nothing out of the ordinary would occur. After all, the wine was from the 2005 vintage and has been in its 3 liter bottle for only about 4 years now. But my confidence dissolved to concern when my trusty waiter-style corkscrew shredded the large format cork. Usually corks that disintegrate like this are dry or old but this bottle was shipped by the winery 3 years ago and has been cellared perfectly since I received it.

So I went to my arsenal of corkscrews and chose my weapon. I had bought it in the early 1980’s and have rarely used this corkscrew but it seemed perfect for the challenge. My ah-so corkscrew.

First, forget using this thing with synthetic corks as it will likely result in another type of disaster: the cork pushed into the bottle. But for natural corks of all kinds I have found this corkscrew useful. And it has earned its place as my corkscrew of choice with old, brittle corks. The two prong design doesn’t pierce the cork but contains it along two sides. While twisting and pulling the cork is extracted cleanly from the bottle. I have used this over the years several times and consider it the leader of my personal wine SWAT team.

The double magnum tonight was opened via this method even after my first corkscrew utterly destroyed the cork. It’s nice to have a wine gadget watching your back for just such occasions.