You are here: Home / Archives for Wine Blogging Wednesday

One of the wine trends from 2011 is the rise of Champagne with American consumers up over 20% from  2010. Another trend was Moscato coming out of nowhere to become nearly an overnight success. This could be in part due to the charms of the lightly sparkling frizzante made from this grape in Italy.

Sparkling wine is one of the most versatile at the table with styles to pair with nearly every dish. From bone dry to sweet, single variety to blend, sparkling wine is something we should all drink more of. And it’s made all over the world using the classic process perfected in Champagne. In Germany it is known as Sekt, Spain calls it Cava, in Portugal it goes by Espumante, and in Italy Spumante covers a lot of ground. But great sparkling wine is also made in the New World with world class wines coming from California, New Mexico and Australia. I even hear some very nice sparkling wine is being made these days in England, the country who started the style back some 400 years ago.

So the theme of Wine Blogging Wednesday 74 is Value Sparkling Wine.

Just pick a sparkling wine from any appellation, made from any grape but make sure it sells for $25 or less a bottle (€20, £16). This should open up a lot of interesting selections, from Crémant de Bourgogne, to Cava, to California & New Mexico sparkling, sparkling Shiraz, to even well chosen grower Champagne. Just post your notes by February 15th and ping me @winecast on Twitter or email me with your link at winecast (at) gmail (dot) com. I’m hoping we can once again circle the virtual wagons and taste some great bubbly.

I first found out about Wine Blogging Wednesday in late February of 2005 when Andrew from Spittoon sent me an email inviting me to participate in WBW 7. Back then the wine blogging world was a small group of sites and we frequently commented on each others posts and traded emails. I was intrigued with the idea of a monthly virtual wine tasting event and have participated in 46 of the 72 past events, hosting 4 times. This month’s host, the writer behind the Corkdork blog, has asked us to revisit the wine that first sparked our interest in wine.

My story starts in 1979 when I was in college. At only 19, I was under the legal drinking age in California where I was born and went to school but I spent summers in upstate New York where the drinking age was 18 at the time. Over the summers of 1979 and 1980 I tried just about every form of alcohol but settled mostly on beer as mixed drinks never appealed much too me and the wine I had locally was mostly from Taylor and not very appealing. Since I was summering in Rochester, New York just a short drive to the Finger Lakes AVA you might think it was this regions’ wines that sparked my interest first but, sadly, it was not. But my early experiences while in New York did plant the seeds that bore fruit when I turned 21 and was back in California.

After a couple years studying film at UC San Diego, I transferred to California State University at Chico. This was about a 3 hour drive to Napa Valley but as college students we had plenty of weekend time and my Datsun got very good gas mileage. We also heard wineries didn’t charge anything for tasting which fit our budget perfectly. So one Saturday not long after my 21st birthday in late 1981 my girlfriend and I drove to the Napa Valley to wine taste. Back in those days I knew nothing about wine. In fact, I was so ignorant that I mispronounced most of the grape varieties (Meer-lot, anyone?). It was with this lack of sophistication we ventured up Hwy 29 and pulled into our first winery. If memory serves this was the Robert Mondavi Winery in Oakville where we not only got an interesting tour but a very informative guided tasting. And the wines tasted pretty good, too, particularly the whites (Mondavi Fumé Blanc is still a sentimental favorite). I also remember visits to Sutter Home (pre- “Home of white Zin” days) and Louis Martini on this first visit. We liked a lot of the wines with our favorite being the Sutter Home Muscat (now somewhat ironic given Muscat’s resurgence in popularity over the past year). Anything white and sweet filled the bill. Everyone starts someplace. 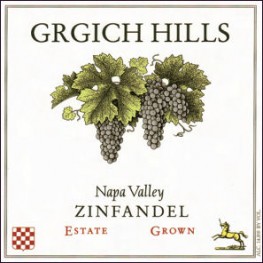 Months past and we revisited Napa Valley a few more times. As we gained a bit more knowledge and confidence we visited new and different wineries. One of these was Grgich Hills Cellar right off the main highway that runs north to south on the western side of Napa Valley. This was in early 1982 and the winery had only been open for 5 years. I remember entering the nondescript tasting room and tasting their Chardonnay. And while this wine was very good it was their Zinfandel that first sparked my interest in wine. Poured by a jovial man in a beret, the wine burst with red fruit on the nose and in the mouth finishing with supple tannins that seemed to melt like bittersweet chocolate. I had tried Zinfandel before but this wine was the first that truly spoke to me and compelled me to learn more about the variety. It was a couple years later that I figured out the man in the beret who poured me this Zinfandel was none other than winemaker Mike Grgich.

Four years later the second wine spark happened. By then I was working for Kodak and we had lived in Rochester, New York for a year and a half. This was the time I first discovered Finger Lakes Riesling and we spent many weekends tasting along the wine trails there. But it was not the local wines that produced this second spark but a well-known Napa Valley Cabernet. Over the previous 4 years I had read several wine books and had tasted a lot of wines. And while I still liked Zinfandel quite a bit drinking Lytton Springs vineyard as often as I could afford it, Cabernet Sauvignon was my latest obsession. I read all about the top Napa Valley Cabernets and drank Bordeaux as often as I could. I had received an award at work that was a gift certificate to a nice local restaurant with a very good wine list. I thought I might find a nice red Bordeaux to match with my prime rib as there were not a lot of California Cabernet on upstate New York wine lists even in the mid-1980’s. 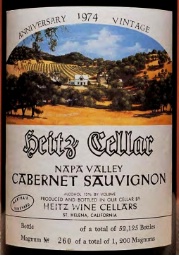 So imagine my surprise when I saw Heitz Cellars Martha’s Vineyard Cabernet from the 1974 vintage on the list. And it was even available by the glass at the absurd price of $25 for a small pour ($52 in 2012 dollars according to WolframAlpha). It took me only a millisecond to order this glass since we were spending Kodak’s money and I couldn’t imagine ever seeing this wine by the glass again (I haven’t). And the wine didn’t disappoint. I still remember the aromas of mint and eucalyptus that this vineyard is known for along with tobacco and a pleasing earthiness. In the mouth this wine defined Napa Cab to my developing palate. Cassis, blackberry, and spices finishing long with great balance. I can’t remember the level of tannin but I think they were still settling down as the wine was only 12 years old at the time I tasted it.

I would have liked to have revisited one or both of these wines but I’m afraid the Heitz Cab is selling for $800 a bottle and I would bet the current vintage of Grgich Hills Zinfandel is vastly different than the 1978 or 1979 I tasted at the winery. But I don’t think this matters much as these wines live in my memory as turning points that made me want to learn more about wine. Eventually this led me to start this blog in order to have a place to send friends who were always asking about which wines to buy.

Just a friendly reminder that Wine Blogging Wednesday 73 is just two weeks away. Our host, The Corkdork, has asked us to revisit the wine that first got your attention to learn more about wine. This could be a carafe of rosé in Paris, Sassicaia 1988, a random bottle of Cahors or Inglenook Cask 1958. Or it could be my wine revelation, the 1974 Hetiz Cellar Martha’s Vineyard Cabernet.

Whatever sparked your deeper interest in wine, please join us on January 18th for the next edition of our monthly virtual tasting. All you need to do is post your thoughts and/or tasting notes somewhere online (your blog, Google+, Tumblr, Posterous) and let the host know. I hope we will find many great stories of wine enlightenment in the process.

So who’s with me?

It doesn’t seem possible that it has been nearly 7 years since I started participating in Wine Blogging Wednesday our virtual wine tasting event which has been infrequent for the past 18 months or so. And that’s a shame since the wine blogging community seems a bit more fragmented than back in 2005 when I posted my first entry in the series. With Twitter, Facebook and now Google+ there are many ways for bloggers to interact and talk about wine but these events disappear over time while what is posted on our blogs endures.

Luckily my enthusiasm for Wine Blogging Wednesday is shared by other bloggers and I’m pleased to report that the event will return on January 18, 2012 hosted by the Corkdork. And the theme our host has chosen is one that should produce a lot of interesting posts: what wine sparked your interest in wine? For me, that would be a wine from a certain vineyard in Dry Creek Valley but since I have told that story here before I will revisit another tale from my path to wine geekdom with stops in the early and late 1980’s. The wines are long gone, or prohibitively expensive, but I will track down some more recent bottlings of these wines to share.

I hope to see a lot of wine bloggers participating this time. Join us if you can next month with your own story of what your wine “spark” was.

It has been nearly three years since I last hosted Wine Blogging Wednesday but my choice of theme was easy. Wines made from Rhône varieties are among my personal favorites and I was hoping to learn about many more new wines from participants this month. There were 25 bloggers posting reviews from all over the world. Thanks again to all who took the time to participate and here they are in the order I learned about them:

So that’s it. I count 25 bloggers and 28 wines tasted. Most of these were red but 8 whites were also reviewed. If I somehow missed your entry, please let me know in the comments and I will update this post.

Thanks again to Lenn for letting me host once again. And without further ado, I pass the baton to Richard from The Passionate Foodie for a very special edition of Wine Blogging Wednesday next month.