You are here: Home / Archives for Articles

This week stories about the 10 year anniversary of Charles Shaw wines began to hit the news. If there is a single wine brand I get asked about by people not into wine, it’s this Trader Joe’s success story. The funny thing is the story of Charles Shaw started over 35 years ago but few have written about it. Look around on the web a bit and you can piece together a tale of a man of vision who made well regarded wines in Napa Valley only to lose his winery and brand. In the end, however, Shaw returns to winemaking in an unlikely appellation. This is his story.

Charles and Lucy Shaw settled in St. Helena in 1974 returning from France where he became fascinated with the production of Beaujolais using the whole cluster fermentation method. Back in those days, the Napa Valley was a vastly different place than it is now with perhaps 50 wineries in the appellation (today there are over 450). Like other new winery owners of this era, Shaw and his wife bought land and planted a vineyard just outside of St. Helena in the middle of Napa Valley. In all, Shaw farmed 70 acres of vines with the majority on the valley floor and about 20 acres on Howell Mountain. Chardonnay, Sauvignon Blanc, Pinot Noir and Gamay were produced garnering accolades for quality.

While the winery made other varieties, it was Gamay and Sauvignon Blanc that were the lynchpins of the Shaw lineup when they opened the winery in 1979. Shaw had developed a love for Gamay while in France, particularly the nouveau style made by carbonic maceration or whole berry fermentation. This technique was not used in California in the 1970’s so Shaw was a pioneer in it’s practice. Beaujolais has always flown under the radar with American consumers and continues to be amoung the best values coming out of France today even with unfavorable exchange rates. But their nouveau style, sold with great fanfare on the third Thursday in November, is viewed by most as a curiosity, others as a marketing stunt and a few as a joke. So hanging your hat on making Napa Valley Gamay Nouveau was not the best business plan. And while a more serious version of the wine was also made getting $8 a bottle proved to be a challenge when well respected Cru Beaujolais was selling for the same price or less. Consulting winemaker Ric Forman, who helped craft the style of Charles Shaw Gamay, summed it up later, “It was unfortunate that his idea didn’t work. It was the wrong product.”

Running a winery is a capital intensive business and by the late 1980’s the Charles Shaw Vineyard & Winery was under extreme financial pressure. These pressures took their toll on the Shaws’ marriage and in 1991 the two were in divorce court. Since Shaw’s wife’s inheritance was used to finance the winery she took over and Charles Shaw left the wine business with nothing more than hard won experience. A year later, Charles Shaw Vineyard & Winery filed Chapter 11 and was eventually sold off in pieces to pay creditors.

This is when the story of Charles Shaw, the Trader Joe’s wine brand, began. Fred Franzia of Bronco Wine Company based in California’s Central Valley purchased the brand name for a reported $18,000 in the early 1990’s. This is not uncommon in the wine business where wine brands with good reputations are purchased and revived later with bulk wines vastly different from their first incarnations. It is unclear why Franzia sat on this brand for a decade before reviving it for Trader Joe’s in 2001.

There are a number of urban legends about Charles Shaw wines that date from the first limited releases in 2001 and 2002. The first anomaly was the 1999, 2000 and 2001 vintages were nearly simultaneously released and quickly sold out. Rumors of fire sales due to airlines selling off stock after September 11 when corkscrews were banned made the rounds. A nasty divorce forced the liquidation at a loss was another story; somewhat closer to the truth but a decade too late for 1999 vintage wines to be sold. The true story is one of wine economics where a huge wine glut created an opportunity in the bulk market that Fred Franzia exploited.

The initial releases of Charles Shaw wines created a sort of reverse wine snob cult. I remember hearing stories from friends in Southern California of people showing up at Trader Joe’s, buying a bottle of each variety in stock and immediately tasting each in the parking lot before buying what they liked by the case. In those days Trader Joe’s had some fairly drinkable private label wines but it was their branded wines sold at closeout prices that were the real values. I once bought some Ridge Merlot at $4.99 a bottle when we lived in LA in the early 1980’s that was an extremely good value. So the use of the Charles Shaw label and not Trader Joe’s was a stroke of wine marketing genius. And from memory the first vintages of Charles Shaw were actually pretty good, most likely the result of savvy bulk wine purchases and good blending. Today the wines are less exciting but certainly more consistent in style made from mostly Central Valley grapes Franzia grows or controls. Highly mechanized agriculture combined with highly mechanized winemaking keep cost low. Selling directly to Trader Joe’s also eliminates another cut of the profit which keeps the selling price at $1.99 or $2.99 a bottle depending on where you live in the U.S.

The result is over 50 million cases of Charles Shaw wines have been sold in the past 10 years. For many this is their everyday wine and while the wines are not very exciting to a lot of us wine geeks they are certainly almost always worth the price charged. And they have created a market for other extreme value brands such as Cameron Hughes and Castle Rock to bring vastly better wines at somewhat higher prices.

And Charles Shaw did get back in the wine business a few years ago making Riesling in Michigan under the Oerther Vineyard label. Let’s hope this venture works out better for him than his experience in Napa Valley.

What a long strange trip it’s been.

Watch Paul Giamatti’s eyes while Virginia Madsen is speaking. Great acting in the best wine scene ever in film.

From what I am reading, this week will make or break the year for retailers. So I don’t think it’s too late to post some gift ideas for wine lovers. We are a difficult bunch to buy for with the most obvious gift — wine — somewhat intimidating for our friends and family to gift. You could get around this somewhat with a gift certificate to a favorite wine store or producer but half the fun of the holiday season is the instant gratification of opening a well chosen present.

So I offer a short list of last minute gift ideas sure to bring a simile to the face of wine lovers in your life. 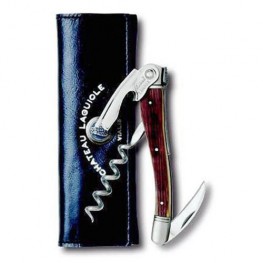 Corkscrews: While some wine lover collect corkscrews most of us accumulate them over time. I just went around the house and counted 10 corkscrews of various kinds in drawers. So clearly I don’t really need any more corkscrews but like with cars appreciate design and elegance. The BMW or Mercedes of corkscrews are made by Chateau Laguiole in France. They are literally works of art made from fine materials and well balanced. Go to most any fine restaurant and 9 times of out 10 the sommelier is wielding a Laguiole. Like many luxury goods there are Laguiole-style corkscrews for as low as $20. The genuine article starts at $140 and goes up to over $200 depending on the materials used.

Decanters: There are a plethora of wine aerator gadgets on the market and I have tried nearly all of them. Some are nicely designed and look cool while you pour your glass out of the bottle. But none of them in my testing has really done the job of opening up a young wine like a plain old decanter does. And that same decanter does double duty of making a vessel for fine old wines who require separation from their sediment. No wine lover can have enough decanters and they don’t have to cost a lot of money. Here are a couple of options to get you started.

Books: No wine lover can have enough books on our favorite subject and I have several listed on the right sidebar of my blog (just scroll down). The most essential is Jancis Robinson’s Oxford Companion to Wine which is my go-to resource for any wine subject. There have also been several well reviewed new wine books published this year such as Authentic Wine and Naked Wine which are on my reading list.

Wine Away: Wine lovers eventually spill red wine on clothes, furniture or carpet. Wine Away makes these inevitable disasters easy to clean up.

Cleaning accessories: I use a brush and cleaning solution to care for my glassware but a lot of people this time of year use their automatic dishwasher. To give wine stems a chance of survival you need something like the cool looking Tether stemware preserver.

Whatever gift you choose, you best get it ordered soon since we have slightly less than 6 shopping days left until Christmas and Hanukkah begins on Tuesday!

At today’s Web 2.0 Summit in San Francisco, Digg founder and serial entrepreneur Kevin Rose announced a new iPhone app called Oink that looks like a mash-up of Foursquare and Digg. The premise is simple; check in things you like and then the community on Oink will vote your item up or down. All of this happens on the iPhone with a simple to user interface that most people will get the moment they open the app.

Like other iPhone apps, Oink integrates the camera and location services allowing the user to tag items that interests them. Rose used food and drink as the main application in his demonstration which included tea, sushi and even wine. Future enhancements include recommendations so the app will point you to other things you might like Amazon-style.

I think this app looks very interesting for rating and sharing wines. Once it is released I will take a look and post a review. In the meantime you can see the full presentation in the video below and read more about it at the source link. 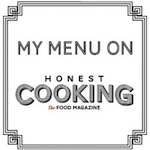 On Monday of this week a new online food and wine magazine, Honest Cooking, launched. An audacious experiment in group blogging led by Kalle Bergman, the site features the writing of over 50 food and wine writers from around the globe. And I am pleased to be a small part of the staff, writing a few posts each week about wine, travel, food and, yes, cooking. You can check out my first posts here.

I have blogged a few times on the future of wine writing here and believe the “magazines” of the future will be digital and mobile. Being on the ground floor of such an enterprise is exactly the place I’d like to be which is the reason I accepted Kalle’s offer to write for Honest Cooking. I have no idea where this will lead but it’s great to be a part of a startup digital food and wine publication. I invite you to check the site out and let me know what you think in the comments.