You are here: Home / Articles / OTBN 13: A Night of Regret & Discovery

Although I was an avid and longtime reader of Dottie Gaiter and John Brecher’s weekly Wall Street Journal wine column, I never have participated in Open That Bottle Night (OTBN). Started in 2000, the event was created as an excuse to open a special wine that remains for whatever reason languishing in your cellar. I have had several candidates for such treatment but when the last Saturday in February arrived I never thought to actually open one of these long forgotten bottles. 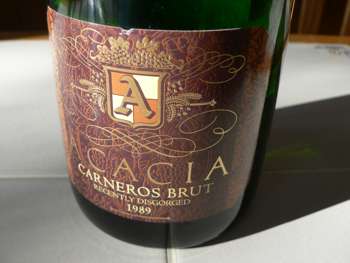 That was until this past weekend when I saw someone mention the event on Twitter and decided to take action. The bottle in question is a 1989 Acacia Vineyard Carneros Brut sparkling wine “recently disgorged”. The recently disgorged style was developed by Bollenger in 1961 for their 1952 Bollinger Grande Année. The extra bottle age before the yeast is removed and the final dosage is added gives the wine additional flavor and complexity. And by disgorging the yeast late, the wine also retains more freshness and fruit than if the bottle was aged after disgorgement. Since I received the bottle of Acacia as part of their wine club shipment in 2005 or 2006, I assume the wine was left for a decade or more on the lees in bottle.

Since 1989 is the year of my daughter’s birth, I assumed we would open the bottle a couple years ago as part of her 21st birthday celebration. For one reason or another the bottle remained in the cellar and so I naturally assumed the worst as I plucked the bottle from the rack. I’ve had my share of over the hill wines. Most of the time those blasted plastic corks are to blame but other times it’s simply a bottle left far past it’s proper drinking window. For those of us with collections, this happens more often than you might expect but the Great Recession has greatly depleted my cellar and so these bottles are now much easier to spot. This particular Acacia Brut was a perfect choice for OTBN as there was the chance of magic. I’ve had their sparkling wines before after extended aging and enjoyed them and the promise of a wine disgorged only 8 years ago or so made me optimistic as I eased the cork from the bottle with a satisfying pop.

Pouring the wine in the flute showed a still vigorous bead of fine bubbles through a rich golden yellow color. Since it was still on the light golden side, somewhat like apple juice, I thought that perhaps there might be something left to this wine. All of these hopes were dashed when I lifted the flute to my nose and got the unmistakable whiff of oxidized wine. But there was still some yeasty bread notes, citrus and almond  there so I took a sip over my sink thinking it would most likely be immediately spit out. But the flavors are still actually pretty nice. Some Sherry-like oxidative elements to be sure but also lemon and some green apple flavors that finish clean with bright acidity. The yeast had certainly left it’s mark in palate weight and complexity, as well, with a pleasant nuttiness on the long finish. Overall, the wine has clearly seen better days but is still interesting even with the somewhat off-putting aromas.

Three days later I have another glass siting in front of me as I finish this post. No, this is not a great wine but enjoyable none the less, and I’m quite happy Open That Bottle Night presented an excuse to try it. Otherwise, I’m sure it would have just gone down the drain in 5 or 6 more years. So if you have a long forgotten bottle collecting dust, get a corkscrew and see what you have there. You might just get lucky and discover something interesting.