You are here: Home / Wine News / A Return To My Roots at ZAP 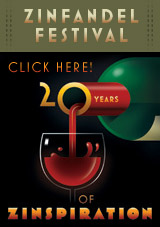 It’s been four years since I’ve attended the Zinfandel Advocates and Producers (ZAP) Grand Tasting in San Francisco. But this year I will be making the pilgrimage once again due to the fortuitous timing of a speaking engagement and business trip. ZAP is not only a place to taste an amazing cross section of wines made from the grape but also somewhat of an endurance test of the palate. But since Zinfandel was the first variety that truly spoke to me, I’ve developed somewhat of a tolerance for it’s harshness even if I taste 70 or 80 over the course of the day.

I was reminded of how close to the ZAP tasting we are from Jay McInerney’s column in this weekend’s Wall Street Journal. He highlights the tasting but also does a short history of Zinfandel in California that took me back to my early days learning about wine. McInerney tells the stories of Paul Draper from Ridge and Joel Peterson of Ravenswood before mentioning more recent notable producers of Zinfandel such as Carlisle and Turley Cellars. At the end he even reviews some wines with one of the best descriptions of Zin I have yet seen in print, “Smells like a blackberry fight.”

So if you will be attending ZAP, hit me up on Twitter and we might be able to compare notes. I’ll also be recording some interviews and scribbling tasting notes into my journal so you can expect some coverage here. For more information on ZAP 2011, check out their website.