You are here: Home / Recommendations / WBW 50: Which wine, which wilderness?

Wine Blogging Wednesday rolls around again with a theme from Russ, the Wine Hiker, of “Which wine, which wilderness.” Sounds pretty straightforward… which wine would you bring on a hike near where you live. The only problem is, I don’t hike.

It’s not that I don’t like hiking, I do, but rarely get on the trail these days here in Minnesota. I like walking and it is my exercise of choice but it’s usually done in my suburban neighborhood or around one of the many lakes in the Twin Cities. Rarely have I ventured up north to where the real action is here in the land of 10,000 lakes.

But this theme not only got me to think about where I might hike but also which wine I might take on the journey. Since I’m one to pack lightly, I chose a wine I could enjoy without a corkscrew. That left every wine made here in Minnesota behind but there were several choices left on the shelf. I also assumed I would bring simple water glasses or metal cups and not the usual Riedel stems on my hike so the choice should be something hearty. This got me thinking of the wines of Italy which are often consumed in humble glassware. Alas, I was not able to find a wine in screwcap or other non-corkscrew closure from Italy but my friends in California did not disappoint. 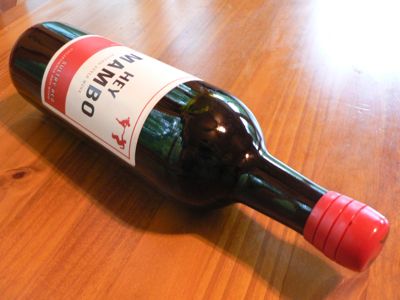 Since part of the task was to match this wine with a hike, I consulted Google to select one of the top 10 hikes in the country right in my backyard, the Superior Hiking Trail. This trail covers over 200 miles from Two Harbors, MN — near Duluth — to the Canadian border. The north shore of Lake Superior is some of the most beautiful country you are likely to see and this time of year it’s awesome due to our long Indian summer and fall colors. At some point, I will make this hike and might just bring along the wine I picked up for the journey, Hey Mambo.

This is one of those “marketing wines” from Don Sebastiani and Sons which I’ve been meaning to try anyway. Great label, interesting premise and the Zork closure all for $12.99. I was also intrigued by the blend of Barbera, Zinfandel, Syrah, Petite Sirah, Carignane and Alicante Bouschet which I thought would be a good choice for my water glass/cup scenario. So I was looking forward to what might be in the glass tonight.

The Other Guys, “Hey Mambo”, Sultry Red 2006 ($13) – Dark purple in color with aromas of blackberry, cranberry, fennel and sage. Bright and juicy in the mouth with blackberry, red cherry, bell pepper and vanilla finishing with moderate tannins. An interesting and satisfying blend in an nice package.

Thanks to Russ for a great theme this time… It will be good to see him again at the upcoming Wine Blogger Conference later this month. Look for the next theme to be announced soon.