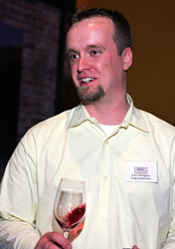 After several days of investigation, including sophisticated reverse IP address lookups, I have confirmed that Lenn Thompson, founder and editor of LENNDEVOURS, is the head writer of the satirical wine blog Wine-ing 2.0. The true author(s) of this blog have been sought for the past week by wine bloggers on Twitter who previously suspected Randy Hall from Wine Biz Radio, MonkuWino from One Wine Per Week and St. Vini from The Zinquisition.

It was also confirmed that Lenn writes most of the posts for all three blog authors but his main persona is “Over Oaked”, a broadside at California wine. Deeper investigation also revealed that the most biting commentary from author “Over Extracted” is actually penned by LENNDEVOURS contributor Jamie Gabrini with much editing from Mr. Thompson.

Even yesterday on IM, Lenn denied having anything to do with Wine-ing 2.0 but an IP address sniffed on the site led back to Thompson’s Long Island home proving he was not enough of a geek to use a Tor server when posting to his clandestine blog.

Now that this mystery is solved, and the American Wine Blog Awards are behind us, it is not clear what wine bloggers will complain about on Twitter. But something will likely emerge in coming days. Stay tuned…

UPDATE: New information has come to light which has confirmed Lenn Thompson is NOT the author of the satirical wine blog Wine-ing 2.0.

I received word from my forensic data researcher that the data packets traced back to Mr. Thompson’s home actually came from a proxy server in Chicago.

I also got a call from Mr. Thompson’s wife, Nena, who said, “…he barely has time to write at LENNDEVOURS, so I’m sure he’s not wasting any time on this Wine-ing foolishness.”

I apologize to Mr. Thompson for any problems this story may have caused for him and will continue my investigation to uncover the true author(s) of Wine-ing 2.0.