You are here: Home / Wine News / Imagine there’s no scores…

I wonder if you can…

But that probably doesn’t matter as the U. S. wine trade is addicted to the 100-point scoring system as the default method to differentiate and sell wine. Why? Because it makes sense to the American consumer brought up with the same system in school. Everyone, it seems, wants an A in either their term paper or glass of Chardonnay. And retailers feel compelled to sell and promote highly rated wines as they drive traffic to their store. 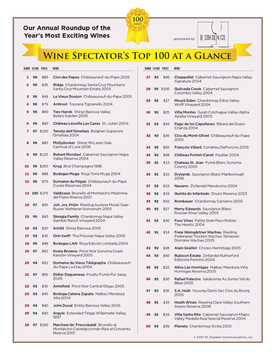 So that’s what makes this proposal to abolish the 100 point system so interesting to me. No, it’s not from a blogger or consumer but from a wine retailer. Isn’t this cutting off your nose to spite your face, you ask? I hope not but a reading of David Lillie’s proposal makes clear that he wants wine lovers to look beyond just the numbers and concentrate on the enjoyment a wine can bring.

He concludes his argument underscoring that precise scores are not the complete measure of a wine:

“The most important argument against the point system is contained in the dedication and hard work of thousands of producers, mostly European but with a growing number in the US, whose efforts to bring delicious naturally made wines to the consumer cannot possibly be graded with a number.”

This got me thinking about the parallels of wine and film criticism. Before I got into wine, I spend a couple years in film school and remain an avid film buff today. One of the elements that make great movies are the technical aspects along with the story and performances of the actors. When these are in the right balance, magic can happen. There are other times when the intention of the director is to just make an entertaining film. Here the technical aspects are most likely emphasized but there is still room for creativity as viewers of recent works of Michael Bay and Paul Greengrass can attest.

I’ll make my comparison to wine illustrated by a couple examples. I think Sergio Leone’s “Duck, You Sucker” is one of the best films in the Western genre. My wife, on the other hand, thinks it’s a long, boring and strange movie. The opening set piece includes some of the most interesting use of the camera in movie history. I see the homages to other Westerns; my wife sees extreme close-ups of peoples’ mouths while eating. It’s the context of the viewer and knowledge of film that makes all the difference in appreciating this work.

As blogged here recently, Ridge Lytton Springs Zinfandel is one of my personal favorite wines. But I couldn’t get my mother to drink it because she thinks all red wines, “…smell like dirt!” She can’t imagine how such a wine can taste good if it smells like it does to her. But she is an avid Chardonnay drinker who values Charles Shaw wines that I find lacking. Is she wrong? Of course not, it’s our context and experience with wine that is different. I’ve learned to appreciate the nuances in wine where she just wants something nice to drink with dinner.

So my rating of 92 or 4 stars will not convince my mother to try Ridge Zinfandel and she probably doesn’t care that I rated Charles Shaw Chardonnay an 80. Nor will my wife sit through another Sergio Leone movie when she’s perfectly happy watching “Top Gun” for the 50th time on cable.

The same can be said for wine and too many wine lovers use ratings as a way to select “good” wine when they should let their palate decide. Yes, there are technical aspects that some of us obsess over but the bottom line is the wine should taste good to you no matter what the critics say.

I don’t know David Lillie or his store, Chambers Street Wine in New York. But I’ll bet it’s a lot like Solo Vino where every wine is hand selected not for it’s Parker score but for it’s expression of the variety and region of origin. Scores will be with us for a long time, but it’s voices like Mr. Lillie that have me seriously thinking of not using the 100 point system in my reviews.

Hat tip to Craig at The Wine Camp Blog for Twittering the link this morning.