Wine Blogging Wednesday rolls into June with a cooler weather theme of Washington State Cabernet Sauvignon. Catie over at Through The Walla Walla Grape Vine is hosting and has asked us to look beyond the mega brands of Washington State such as Columbia Crest and Chateau Ste. Michelle in our selections which I thought would not be a big problem here in the Twin Cities.

As it turned out, I found that the Cabernet aisles of many wine stores here are dominated by Napa Valley brands and some stores only stocked Columbia Crest and Chateau Ste. Michelle. But I was able to track down a selection at one of the larger warehouse stores here but didn’t come up with a bottling from Walla Walla (sorry Catie!). I also noted some older stock from 1996 and 1998 which either indicated slow turn-over or some close-out deals with the distributors here. But I took the plunge and picked a wine from a producer I know nothing about. I figured that is half the fun of this WBW thing, anyway. 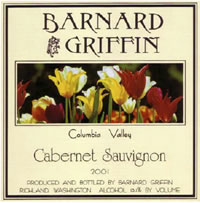 So the wine selected was Barnard Griffin, Cabernet Sauvignon, Columbia Valley 1998 which I picked up for less than $20. The store where I found this wine is not known for their great storage conditions so I took the chance this wine would not be over the hill (likely) or corked (maybe 5% chance). With no “Plan B” if this wine was spoiled, I extracted the slightly dried out cork and broke it in half; not a good start. But once the wine was in the glass, I noted good color and sound aromas so I knew I might have something interesting to taste.

Barnard Griffin Winery was founded in 1983 by Rob Griffin and Deborah Barnard and produces a range of under their “Tulip” and “Reserve” labels. This Cab is from their value priced tulip range. The winery is located in Yakima Valley in south-central Washington just up the road from Walla Walla but the grapes for this wine came from the well known Columbia Valley AVA further north.

Barnard Griffin, Cabernet Sauvignon, Columbia Valley 1998 ($17.50) – Rusty garnet in color getting a little tawny at the rim. Ripe black current, licorice, menthol and pencil lead aromas. Rich and mouth-filling blackberry and current fruit with some cracked pepper and chocolate finishing with dusty, but still noticeable, tannins and good acidity. This must have been a tannic monster at release but has now settled down and is drinking quite well. Given it’s maturity and price point, I think this is a nice value in Cabernet that will hold for another year before decline.

Thanks again to Catie for hosting this month and for opening my eyes to Washington State Cab outside of the big brands. I’ll keep my eye out for some Walla Walla Cab to try in the near future and post a review here. See you all next month when I’m guessing a white or rose theme might be the plan.