You are here: Home / Articles / If Hunter S. Thompson was a wine writer… 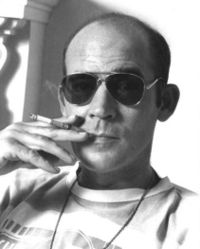 For several days now I’ve been thinking about the discussion in the wine blogosphere about wine ratings but haven’t been sure how to respond. The first salvo was made by Ryan over at Calwineries.com and carried forward by Tom at FERMENTATION but it was Dr. Debs who triggered an angle that prompted my response here. That’s because I think the discussion over scores is a religious battle with each side making valid points.

On one hand, the 100-point scale is the same as the American grading system so it’s easy for us to understand; the downside is the arbitrary nature of scoring, like academic grading, is completely subjective. If I am grading papers written by my marketing students, I look for various points and mark down from 100 to arrive at the final grade. This is reflected in a numerical score that is converted into the A, B, C, D or F grades on their report cards. When “grading” wine, I build from a base of 50, with points added for color, aromas, flavor and overall impression. A much more precise method than grading papers but still completely subjective. An 89 becomes a 91 in different contexts for the same wine as a result sometimes.

The alternative view, equally valid in my book, says that scores are much too precise for something like wine tasting. Judging other art forms like films, plays or paintings does not have such a scoring method. As close as you get are “thumbs up” or “thumbs down” with most of the commentary about why the art is great, average or a complete waste of time. That element is missing in the discussion about wine and I think that’s at the core of my response; scores are a red herring, the real issue is wine writing.

Getting back to Dr. Debs’ post a couple days back, comparing wine writing to cooking is exactly right. I think the good doctor is on to something profound here. This had me thinking about writing styles that most of us use in describing wine in the blogosphere which is based upon the terse styles of the Wine Spectator and Wine Advocate.

What if Hunter S. Thompson wrote about wine, I pondered?

I think it would be an intense first person account of the wine in question, the method (or lack thereof) of experiencing the wine, the food and conversation about said wine and any other stream of consciousness provoked by tasting the wine. This would often veer off into tangents relating to politics, the meaning of life and how stupid it is in the 21st Century to seal wine bottles with the boiled bark of dead trees from Portugal. It would be sometimes profane and as real as if the writer was channeling the spirits of Mr. Thompson, Ernest Hemingway, Andre Tchelistcheff and F. Scott Fitzgerald. In short, it would be a complete break with the current state of affairs in wine writing and I think a positive step in getting more people to enjoy wine.

So I’m going to take a step into this direction and make my reviews less clinical and more interesting. I might rate on the 100-point scale, I might not. Sometimes there will only be lengthy descriptions and analogies, sometimes terse notes and scores. Who knows? I think this is perfectly aligned with my wine twittering movement and will take Winecast, the blog and podcast, in an interesting new direction. Then again, it could take me into the ditch, but my friend Neil says that’s not a bad place to be…

I raise my glass to Hunter S. Thompson and Dr. Debs for getting me to think outside the box. Where this leads, no one knows… but that’s the fun of it 😉