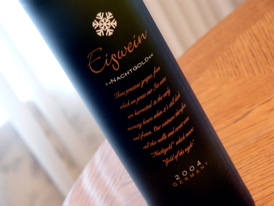 This month’s virtual tasting known as Wine Blogging Wednesday goes into another pricey wine category: Eiswein. This method for making dessert wine started in Germany over 300 years ago and was most likely discovered by accident when an early freeze struck an unpicked vineyard. To be legally called eiswein, the grapes have to be frozen on the vine before picking, which freezes the water content of the berries. These are quickly pressed before the water melts to produce an incredibly sweet wine from literally the essence of the grapes.

Known as “ice wine” outside of Germany, Canada produces some of the best examples of this style in the Provence of Ontario. I’ve had several ice wines from Inniskillin, but I could only find their top end wines here in the Twin Cities that run about $85 a half bottle. For that, I could find several German Eiswein, but still couldn’t pull the trigger at about $50 for the least expensive half bottle I found here. So I started to wonder if there was a value range eiswein on the market that competes with the artificially frozen California (and Minnesota) “ice wines” in the $20 a half bottle range. A Google search turned up a candidate for actually less than $20 that I picked up at Sam’s Club, of all places.

I haven’t thought of Sam’s Club as a place for fine wines but I probably should have. Due to the interesting liquor laws here in Minnesota, Sam’s does not sell wine at all locations. In cities that allow independent sale of liquor, Sam’s has to make their liquor store available to the public, not just to their members. I understand Costco does the same thing. At any rate, I was surprised to see the selection of low and high end wines there and will definitely return to pick up some bottles for the holidays.

So the Eiswein I bought there is from Burgherrn Weinhandels called, “Nachtgold”, which refers to the picking of the grapes at night when they are fully frozen. The wine is from the Rheinhessen region of Germany from undisclosed grape varieties. At only 9.5% alcohol by volume, this will complement fruit or a light dessert. I even liked the black bottle which took me back a few years to my Black Tower and Mateus days (oh, such a wasted youth!). The really shocking thing about this wine is not that it is exclusively sold at a warehouse discount chain, but it’s price: $16.12 for a 500 ml bottle. Even with our somewhat aggressive liquor taxes here, I was out the door for less than $18. But this would not be a deal unless the wine delivered balanced and complex flavors. Here’s what I found:

Burgherrn Weinhandels, “Nachtgold”, Eiswein, QmP Rheinhessen, Germany 2004 ($16) – Golden yellow in color with aromas of apricot, melon and honey. In the mouth, there’s rich apricot, lychee and melon flavors with quite a bit of sugar barely balanced by acidity. Not the most complex eiswein, but a great value and nice introduction to the style.

Thanks to The Kitchen Chick for hosting this month and for a challenging theme. I’m looking forward to reading about all the other interesting ice wines other bloggers tasted, but can’t imagine anyone tried something as inexpensive as mine.