Last evening, sixteen Twin Cities bloggers, podcasters and wine lovers were introduced to the wines of Stormhoek at Zander Cafe in St. Paul. Luckily, thirteen bottles were ready to be consumed, so I thought we had more than enough. By evenings end almost 3 hours later, only two bottles of Pinot Grigio were still sealed.

The wine of the night was the stunning “The Sixteen Barrel” Semillon 2004; pear, fig, herbs, smoke and caramel in a very round, creamy package. We only had one bottle of this and my pours were too generous so we ran out before everyone had a chance to taste (including me; thanks to Garrick for allowing me to try some of his). The most popular wine of the evening was the 2005 Pinotage. As I said when I presented this wine, most Pinotage is very earthy and somewhat green in character (“weedy” is a term that comes to mind) and sometimes produces wines that are quite unpleasant to drink. ItÃƒÂ¢Ã¢â€šÂ¬Ã¢â€žÂ¢s also a binary wine with people either loving or hating it. This was the first Pinotage I have tried with a large group where everyone enjoyed the wine. I think this is because Stormhoek has made this in a bold, jammy style featuring forward boysenberry and blackberry fruit with the earthy character of this varietal in the background. This tasted almost like a Shiraz, making me wonder how they do with that grape. We started the evening with the 2005 Pinot Grigio that was a quaffable citrus and green apple with a touch of minerality; good, but not close to the Pinotage or the delicious Semillon. 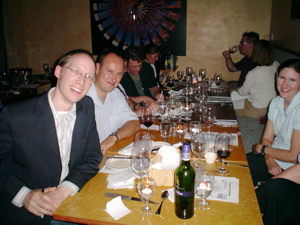 All in all, we were impressed with all three wines but wish we had some of the other varietals to try. Sixteen new Stormhoek customers here in Minnesota are now ready to pay for our further exploration 😉

Thanks to Jason and Samantha from Stormhoek for sending two parcels from the winery and Hugh for the great prints and brochure. IÃƒÂ¢Ã¢â€šÂ¬Ã¢â€žÂ¢ll be collecting my notes and audio from the evening and combining it with an interview with Jason and Hugh recorded at the beginning of the month for a podcast later in the week.

I expect to see some other impressions of the evening to be posted shortly and will collect them here: